Batlow’s former Mountain Maid site is still a blank slate after the Snowy Valleys Council spent $854,000 to demolish the site and clean up bushfire damage after the 2019/20 Dunns Road fire.

Later this month, the public will have an opportunity to comment on a range of ideas for the location when the SVC’s Community Consultation Findings Report and Spatial Assessment Plans will be put on the council’s website for public feedback.

The report is expected to be shared online from Monday, September 10, for 28 days. It includes both short term and long term proposals.

• Enterprises ancillary to recreational infrastructure such as walking tracks/heritage trails and cycle ways, both within the town and beyond.

The council hosted drop-in sessions last February to collect ideas from the community. The council said the site “generated a lot of discussion over the years, in particular around what it could become.”

The findings from the February sessions were presented to the council during their July meeting and resulted in the report which will be put out for comment next week.

One such idea which has been raised by local orchardist and now cattle farmer Barney Hyams is to convert the site into a botanical garden, which could also serve as a trackhead for a future Batlow to Tumut Rail Trail.

Mr Hyams said the site, which backs onto the council-owned Batlow Caravan Park, could become a significant drawcard for tourists.

“I think there’s a real possibility for this site into the future,” he said, adding that the garden could also house a “free flight aviary, working with one of the zoos with endangered bird species” and potentially a koala sanctuary.

“All this could link into a rail trail network,” said Mr Hyams.

“There was a lot of discussion about [a rail trail network] from Cootamundra to Gundagai to Tumut to Batlow.”

From there, Mr Hyams said the network could follow a forestry easement to Tumbarumba and connect with the existing Tumbarumba to Rosewood Rail Trail and tie into Wagga, running through Humula.

“I just think that would be enormous from a tourism perspective,” said Mr Hyams.

The rail trail has long been a contentious issue for farmers living along the proposed route in the Gilmore Valley. The farmers argue that their predecessors donated an easement on their land to support the railway, but didn’t imagine it would be repurposed for tourism purposes. They object to the lifestyle and agricultural impacts which a steady stream of tourists could bring through their pastures.

Mr Hyams said the Mountain Maid site could be developed independently of any rail trail projects, but maintained that he supports the trail and the benefits it could bring for the wider Snowy Valleys community.

“There’s huge opportunities for this space,” he said.

“We’re a really good place to grow temperate deciduous trees here, so we could have an enormous amount of colour at this time of year in Batlow.”

Part of the site is currently leased for horticultural purposes. Mr Hyams said development of a community project could begin on the unused portion of the site, if the council were to “have an appetite for it.”

“It’s a big project,” he acknowledged.

“It all comes down to funding, but then it’s really job generating.”

“It just would be a wonderful asset for the Snowy Valleys,” he said.

“Not just for Batlow, but for the entire area.

“What we need is something that is going to pull tourists through. Currently Tumut’s pretty popular at various times of the year, but with the timber industry going to be in downturn for the next 20 years, we need some type of income for these communities. Tourism is a great form of passive income.

“All these things are achievable, it’s just council and governments having an appetite for it.”

The council is facing an election this December, with current Batlow councillor Margaret Isselmann already declaring she intends to stand aside this time around. Instead, Batlow Rotary President Sam Hughes and Greens Member Marjory Tomlinson will put their names forward from Batlow.

Ms Tomlinson said she wasn’t in favour of using animals for tourism purposes, but said she would support using the former Mountain Maid site as a rail trail trackhead.

She also opposed the idea of using the site as a garden, saying it would be better suited to more commercial purposes, given the extensive concreting already in place.

“I think the botanic gardens are a fabulous idea, but not at that site,” she said.

“I think there are better uses for that site. We’ve got a lot of unconcreted land around Batlow that would make wonderful botanic gardens.”

She said she’d prefer to see “a nice coffee shop” on the site and some interactive information about the history of Batlow, which could include audio/visual stories about the development of the town from the Women’s Land Army through to last year’s bushfire.

“I think there’s lots of good uses for [the site] and the botanic garden [could be located] behind the caravan park,” she said.

“That would be great, especially if it was native species, with a really nice coffee shop down there where people can just park their bikes outside. “We need something hip. Cyclists like things that are hip and something a bit more modern; maybe a little bar or something.”

The variety of ideas and attitudes towards the site highlight the challenges the council has faced as they seek community consensus on a path forward.

The consultation period held earlier this year is still being reviewed, with council saying a report is likely to come forward

“I’m dying for the results of that consultation to come out,” she said.

Mr Hyams said he’s hopeful that some development will get started on the site and ‘build momentum’.

“There’s no reason why the town that was most affected in the bushfires can’t have a big project,” he said, referencing large projects built in other Snowy Valleys towns with post-bushfire funding, such as the sports stadium and evacuation centre which has been announced for Tumut. 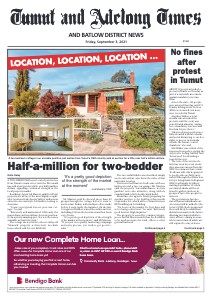