Families enrolling their kids in swimming lessons are “through the roof” following a recent spate of drownings across NSW, according to Local Pools Manager Dave Mayo.

The sweltering temperatures of late certainly haven’t hurt either, with the mercury due to stay above thirty well into next week.

Mr Mayo believes parents are helping to kids keep cool and stay safe at the same time, reacting sensibly to news of 20 drowning deaths in the state since Christmas.

“The thinking is that it’s to do with the tragedies that have been reported in the media lately,” he said.

“The publicity has had an impact on people’s thinking and our learn to swim lessons are nearly at capacity.”

The lifeguards in Mr Mayo’s network, which include Tumut, Adelong, and Batlow, intervene in a close call about once a week. He credits the pools’ safe reputations to their skill and experience in taking pre-emptive measures.

However, he said it’s vital people don’t get complacent when it comes to water safety.

“I really think the local population is a little bit blasé about the need to keep refreshing kids lessons,” he said.

“This year we have great water temperature. We have return instructors, so the kids and the instructors have a rapport and that’s building on itself each year.”

The local pools also offer adult swimming lessons, which can be easily arranged by calling up and requesting one-on-one time with an instructor.

Along with ensuring they’ll be an able supervisor if swimming children require intervention, swimming for adults has a range of other benefits. It’s been shown to have positive effects on those with depression, on those with underlying medical conditions, those on medication, and others whom doctors have recommended gentle exercise.

“It speaks for itself,” said Mr Mayo.

“Ring the pool. Put forward your desire to learn to swim. Think of the positive benefits; the life-skills that you’ll gain.

“Learn these things so that if something does happen, you’re able to react positively, and you don’t become another tragedy.”

Riverina could be among first to leave lockdown 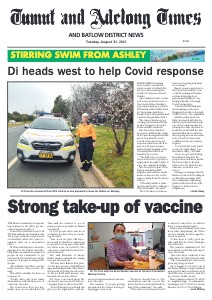