TransGrid has responded to a critical report from independent consultant Rod Stowe by pledging greater community consultation on their HumeLink project, but residents living along the proposed 500 kV powerline route say the moves are off-key and come too late.

Jen Dumbrell has been helping lead a group of affected landholders. She said TransGrid’s announcement that they will be forming a community consultation group is insulting to the groups already in existence.

“We are still not being acknowledged as a group representing landowners and the community,” she said.

Mrs Dumbrell said the community groups have already been well established, working together for close to 18 months. She’s disappointed that while they’ve remained in place, they’ve had to deal with numerous different people in changing roles.

The group, which is chaired by Bill Kingwill and co-chaired by Mrs Dumbrell, has been campaigning for a route which “follows a path of least impact to landowners”, attempting to steer the powerlines away from productive farm land and communities. They’re calling on TransGrid to use existing powerline corridors and “public land as a first priority.”

The timing has felt especially poor to the landholders, since the TransGrid representatives who had spent the most time in the Snowy Valleys have left the company. Mrs Dumbrell said landholders feel like they’re having to start again from scratch.

“The team that we met with on numerous occasions led by Graeme Wedderburn, Kath Logan etc has all but practically dissolved,” she said.

“TransGrid had a major restructure with a lot of people “moving on” or being told to “move on” however you want to look at it. As a result, we have been left with no contact or contacts within TransGrid because of this.

“These consultative groups are nothing but a box ticking exercise and ploy to recover some social credibility on the back of the Stowe report and its findings that TransGrid failed miserably at working with people. The community consultation is done as far as we are concerned… and yes it was done very poorly from TransGrid’s side.”

The powerlines will eventually connect Snowy 2.0 with the metropolitan grid, passing through the Snowy Valleys in two corridors – one through the Yaven Valley and the other east of Tumut, running through the Gilmore Valley.

“There are route options that we have put to TransGrid as alternatives at all of our meetings,” said Mrs Dumbrell,

“In March, the announcement of the ‘new route’ was not what we advocated for and was a kick in the guts and blatant disregard for any of the concerns that the Action Group put forward and the work and time taken to represent the landowners and the community up to this point.

“It was evident in the delivery of this information as well as the new route put forward which affected a whole new set of landowners that were previously not impacted.”

The proposed routes announced in March were pleasing for some landowners, especially in the Yaven Valley, but put an entirely new set of farmers in the line of the project. Few landholders along the Gilmore route were satisfied with the new proposals.

Mrs Dumbrell said the entire consultative process has been a mess and condemned TransGrid for a lack of engagement with the community over the past six months.

“Since the announcement in March and up until the last few weeks we have heard nothing from TransGrid,” she said.

“TransGrid announced last month that approximately 80 properties between Book Book, east of Wagga Wagga and Gobarralong, north of Gundagai, will no longer fall within the preferred corridor for the HumeLink transmission line.

“What this means for landholders in the Tumut and surrounding communities is that TransGrid’s preference was now to build a double circuit configuration between the three substation locations in Wagga Wagga, Maragle and Bannaby. This would mean that both the original route and the “new” route are still on the table as options but would now be a double circuit configuration.

“We still have not received confirmation from TransGrid of the actual route they are considering in this area.”

Mrs Dumbrell said she and Mr Kingwill have made repeated requests for clarification on the new routes, but have received none. Both the original proposed route and the route proposed last March still appear to be on the table as options in the online HumeLink interactive map.

“We know they are working on the corridor, but which corridor?” Mrs Dumbrell asked.

“Those landholders on the original route… that ran past the airport to the west side of Tumut and through the Gilmore Valley – myself being one of them – are not out of the woods yet.”

The Action Group has secured an online meeting with TransGrid, scheduled for September 22, during which time Mrs Dumbrell said they’d be ‘pushing for feedback on a clearly defined route.’

“Enough is enough,” she said.

“I am hopeful that from this meeting, we will have some news for affected landholders and the community.”

TransGrid has responded to community frustration surrounding their new Community Consultative Groups, saying the move is in line with the 20 recommendations from independent landowner advocate – and former NSW Commissioner for Fair Trading – Rod Stowe.

Despite backlash from existing community groups, TransGrid said it remains committed to establishing Community Consultative Groups to “provide a structured, ongoing forum for people to provide input about HumeLink.”

“We are actively re-setting our community engagement processes to ensure ongoing transparency about the critical project,” said a spokesperson.

“The Groups are being created in response to the 20 recommendations recently made by landowner advocate, former NSW Commissioner for Fair Trading Rod Stowe, following his review of TransGrid’s approach to engagement.

“ Our team will continue to liaise with any existing or future community or landowner group throughout the course of the project.”

The new groups will include a selection of representatives from the community groups and affected councils, as well as individual landowners. The group is expected to be finalised within the next month, ready to begin conversations with the company’s leadership.

“Recently we finalised the technical assessment of various network configurations, known as circuits, to determine which circuit will deliver the best network reliability, capacity and value-for-money,” said the spokesperson, addressing questions about a proposed ‘double circuit’ around Maragle, which will eliminate the need for the powerlines to travel through Book Book and Gobarralong.

“A double-circuit configuration has been identified as the preferred option for the HumeLink project and was submitted to the Australian Energy Regulator in late July.

“A circuit option can be delivered via various route options, and not all route options currently under consideration will be built.”

The company is continuing to finalise the implications of the double-circuit proposal and promised more details “in the near future.”

Tumut Hospital healthcare staff ‘well on the way’ to vaccination 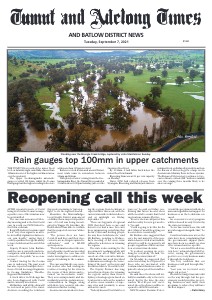