The Tumut river will be transported back in time to the 70’s this weekend when the Tumut River Race hits the waterways on Sunday.

The popular event was at its peak in the 70s with people turning out in droves to participate in the race. Starting at Blowering Dam wall, the race follows a 25km track downstream before crossing the finish line at Tumut Turf Club.

However, interested slowly dwindled and ultimately resulted in the race being canceled in 1978. But due to the scenic location and fast flowing waters, the race was recently revived and organizers are attempting to bring the sport back to its hay day.

“Its a little bit like back to the future, this is how canoeing used to be in the 70s,” race organizer Tony Mission said. 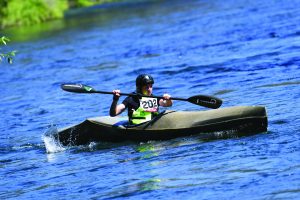 “It’s a really great event, we’re trying to bring it back to what it used to be.

“Its just a lovely river to paddle on so we’re hoping to build up numbers and engage the local community.”

The race which attracts people of all skill levels from rookies to the best in the region is capitalizing on a growth in the sport in Victoria where numbers have been surprising race organizers.

The increase in popularity has come off the back of targeting ‘casual paddlers’ who are more interested in a gentle glide downstream rather than a heart-pumping 25km race.

As a result, this year’s event will also include a community fun paddle which operates more similar to a ‘fun run’ event.

The fun paddle starts at the same time as the race but there is no reward for winning, instead, spot prizes are handed out at random to people participating in the event.

Tony Misson, who organizes races across NSW and VIC, says the fun paddle aspect has been extremely beneficial.

“Fun paddles have been really successful in Victoria and attracted large numbers,” he said.

“Instead of people focusing on winning or losing it’s about people enjoying the environment and having fun.

“The fun paddle caters for the general population with sit on’s, sea kayaks or a canoe collecting dust in the shed.”

Kayak and Canoeing sports are also Olympic events, and Misson says it serves as a pathway into the sport.

“We’ve got the blessing of Paddle Australia who are watching with interest to see how it works out,” he said.

“It provides a pathway for people to get interested in the sport.”

Prizes such as outdoor and paddling gear will be on offer as spot prizes in the community fun paddle. The 25km section has no rapids; however the water is fast flowing, crystal clear and may be cold. The event starts at 10.30am Sunday 14th October at Blowering Dam wall.