Schools are back in session this week, just in time for the term to finish on Friday. The on-and-off lockdown measures have been difficult for some students to adapt to, especially those with major exams ahead, and those who rely heavily on routine.

For Year 12 students, it’s been especially difficult to stay on track, with the HSC pushed back by four weeks and one day, just as students felt like they were nearing the end of their secondary career.

Tumut High School has been encouraging students to take the two-week holiday as a mental break and spend time relaxing with family and friends, rather than spending too much time studying.

In a video message to senior students, the school’s four captains shared words of encouragement.

Captain Andy Dodds pointed forward to an intensive study week, which will be held in Week Five next term.

“You don’t follow the timetable specifically, but the teachers will still be available during those times,” he said, explaining how teachers will be on hand to help students with their individual HSC preparations.

“Virtually nothing has changed layout-wise,” he said. “[The HSC} still goes for 4 weeks. Results and ATARS will be released on the 20th of January.”

HSC major works and performances must be submitted by the end of Week Ten next term.

Vice Captain Jeane van der Merwe contained a smirk as she spoke of hearing in the fifth term of Year 12, reminding fellow students of the Year 12 final assembly (Friday, October 29) and to submit student profiles and photos for the slideshow and yearbook.

“Keep your heads up, we’re nearly there guys,” she said.

“I know we’re so sick of hearing it, but it is our final stretch. We’ll get there in the end.”

Captain Liana Smithson added, “I know this is not what any of us imagined Year 12 would finish like, but we’re just going to have to work with whatever we’ve got and stay positive and focussed.

“During the two week holiday, we are encouraged to relax and take a break before we prepare ourselves for Term 4, where we will have five weeks of study before we sit the HSC.

“I just want everyone to stay positive and reach out for help if they need, because we are supported by so many.”

At Franklin Public School, Principal Carmel Stuckey said she was surprised that school was back for just one week, but said overall, reactions from staff and parents were positive.

“Most kids are back,” she said on Monday morning, “I think parents were pleased and staff were pleased to have some consistency.”

Ms Stuckey said she was hopeful that there wouldn’t be any further lockdowns.

At Snowy Valleys School, Principal Moira Kingwill said 22 out of 24 students were back in classes on Monday.

“We put a lot of preparation into everything, ready for everyone to come back to school,” she said.

“I think [the staff] were not expecting to come back, but they were ready.

“We’re at Level 3 [restrictions] and not Level 2 – which we were at before lockdown – so we have to follow those guidelines, which are a little more restrictive.”

Ms Kingwill said she had expected some of her students with special needs would stay home this week, to maintain a sense of routine for those who find constant change difficult.

“For some of our students, their routines are very set,” she said.

“To come back for one week of school and then go into school holidays – that is two very different routines very quickly and they have to change.”

To help the students adapt, teachers are using visuals, schedules and stories to help ease the back-and-forth of lockdowns and stay at home orders.

Businesses come back to life 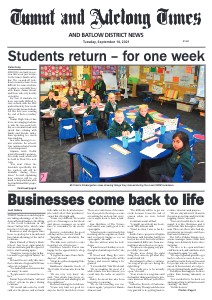