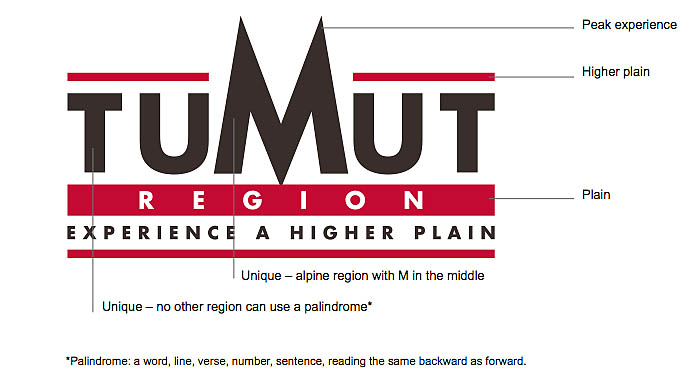 The Tumut region has undergone a revamp in an attempt to increase tourism and to bring the region’s brand into the future.

The presentation follows months on consultations with council and industry.

Ms Prouse said as a destination and brand Tumut attracts those seeking a sense freedom and as such it is important for the brand to project an explorer personality.

Tumut’s new logo emphasises the unique palindromic nature of the word, while emphasising the alpine ties and the new slogan ‘Experience a higher plain’.

Both logo, and new tagline are designed to encompass Tumut’s explorer personality while appealing to the groups of tourists likely to be attracted to the region.

Ms Prouse said the new logo may divide the community, but will help entice people to visit the region.

“The thing is with creating logos if we were to design one which everyone liked we’d never get there, so what we do is we design a logo based on the strategy we’re putting in place.”

Ms Prouse said the logo is only a small part of the wider brand guidelines, but they believed the original Tumut logo was no representing the region as an explorer brand or destination.

“The higher plain is both physical and spiritual, people keep saying to me, ‘well Tumut’s in a valley’: The perception is for the consumer is that you are entering into the foothills of the Mountains. Leverage the perception don’t say ‘oh no we’re not we’re actually in a valley over here’ because the valley creates the beauty and contrast to the mountains.”

The presentation also suggested created Tumut branded outdoor wear and merchandise that could be used during exploring activities.

In a Tumut Region marketing plan detailing recommendations and key performance indicators from 2016 to 2019, Ms Prouse recommended a full audit of existing services and digital channels, with new approaches for the website and social media suggested by September 2016.

Ms Prouse recommended investigating the return on investment council receives from the $140,000 they invest annually in the Visitor’s Centre.

Over the state only 28 per cent of tourists on average use Visitor Centres.

Ms Prouse was quick to say she was not suggesting de-funding the centre, saying she suspected the percentage would be higher here, but all funding should have evidenced based results.

“It needs to be investigated, we want evidence and want to known the return on investment, you’ve only get a certain amount of money to go around and it must be questioned and analysed,” she said.

“It might be perfect but it’s about knowing and having evidence.”

Council to advocate for HumeLink compensation