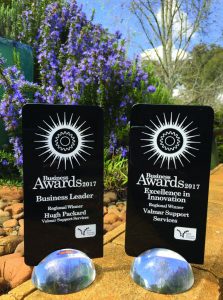 After cleaning up at the Tumut Region Business Awards earlier this year, Valmar Support Services and its CEO Hugh Packard have been recognised with two awards at the Murray-Riverina Business Awards, held in Albury on Friday night.

The awards evaluated businesses from Wagga, Albury, and surrounding towns. They decided that Valmar was the cream of the crop when it comes to ‘Excellence in Innovation,’ and that Hugh Packard was the best candidate for ‘2017 Business Leader.’

Mr Packard said that he hoped the awards would be meaningful to Valmar’s hardworking staff.

“The innovation one is great because that actually recognises three years worth of work,” he said.

“I certainly made that very clear in my acceptance speech: we’re nothing other than our staff.

“It’s very, very rewarding, personally rewarding, to see that the efforts of the organisation are being acknowledged.”

A Murray-Riverina spokesperson said that Valmar one the innovation award for a new IT system.

“Valmar provides a wide range of community based support services to people with disabilities and the frail aged,” they said.

“With the introduction National Disability Support Scheme NDIS Valmar conceptualised developed and launched LINKS-U, an electronic client management system at a total cost of less than $220 thousand but with a true market value of $3 million.

“LINKS-U is hosted on the cloud for almost zero cost and available 24/7 to enable staff to capture all NDIS chargeable activities at the point of delivery in real time. LINKS-U enables Valmar to minimise their payment risks from NDIS.”

The Business Leader gong was awarded to Mr Packard because, “In his impressive 26th year as the CEO of Valmar, Hugh has not only helped to consistently grow the business but has also made an impact on the industry nationally and internationally through his commitment and leadership skills,” the spokesperson said.

Valmar was the only Tumut-based organisation to win in their category. They will now go on the NSW Business Awards held at Darling Harbour later this year.